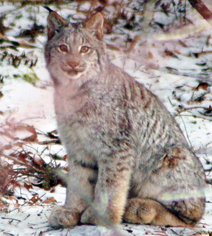 At a meeting on Jan. 23, members of the Council’s Wildlife Committee decided to send responses to two U.S. Fish and Wildlife Service (USFWS) open comment periods under the Endangered Species Act. MFPC just sent comments, reports and photos sent in by our members regarding the Canada lynx status review. Even if you just want to look at great pictures of lynx, this report is worth seeing. The Northern Long-eared Bat is currently under review for possible listing as endangered or threatened and, just recently, USFWS has published a possible “4 (d) exemption from take” that would include most forestry activities.

For lynx, chair Barry Burgason agreed to draft a statement that argues that the Canada lynx in Maine does not need to be listed as federally threatened since populations appear to be adequate and current and future habitat are in good condition. State and university research since the lynx was listed in 2000 determined that the high quality lynx habitat we have in the state today is a result of the salvage clearcutting resulting from the last budworm epidemic and, with the predicted return of the budworm eminent, stand replacing mortality and salvage harvesting should benefit the long term outlook for preferred lynx habitat.

While the Council does not have quantitative information regarding the lynx population, we do have an army of foresters and loggers working in lynx habitat on a daily basis. The committee has asked foresters to provide anecdotal sighting of lynx, lynx tracks and photos in their region that suggest a healthy lynx population. Combined with MEIFW data, there is a compelling case that lynx do not deserve threatened status.

As most members are aware, USFWS has proposed listing the Northern Long-Eared Bat (NLEB) as either an endangered or threatened species throughout their range, due largely to the decline caused by an introduced fungi called “white-nose syndrome”. Once a species is listed as either endangered or threatened, any “take” (killing) of the species becomes prohibited. Forestry groups from throughout the NLEB range have been concerned with the impact listing would have on timber harvesting during the summer “pupping season” when bats are raising their young in forest stands everywhere. Those concerns have been reflected in comments submitted to USFWS and apparently, they are paying heed.

On January 15, USFWS published a proposed 4 (d) forestry exemption in the federal register. An exemption is an acknowledgement by the Service that some activities may result in unintended mortality of the bat but it will not be enough to affect the recovery of the species and will not be considered a “take”. With the addition of the exemption, USFWS now has 4 options for dealing with the NLEB:

Options 3 and 4 are the ones forest industry has promoted.  By publishing and opening a comment period on the exemption now, they would be able to immediately enact the 4 (d) exemption at the same time they make their listing determination on April 2, rather than making a listing determination, then going through the exemption process.  They began a 60 day comment period on the proposed exemption with comments due by March 17. Henning Stabins has agreed to draft a response on behalf of the Council.

There are no events to display

Networking
You’re invited! Take advantage of the Council’s many opportunities to visit with the who’s who of Maine’s forest products industry at any of our special events.